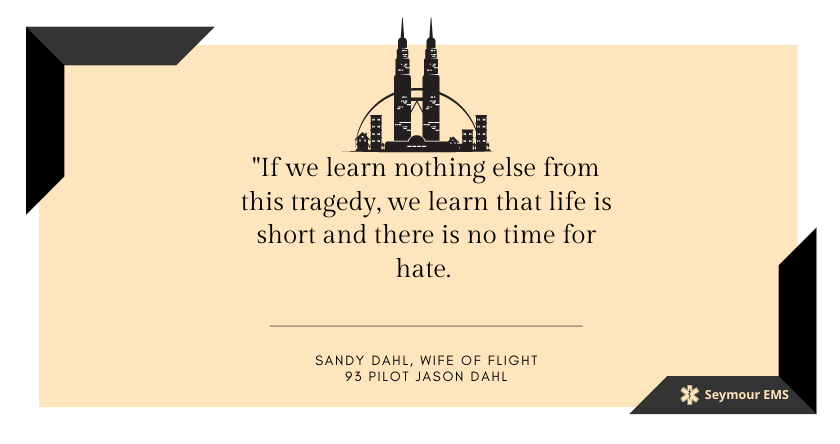 How to thank 9/11 first responders is a question that plagues the minds of many Americans as the anniversary rolls around each year. As we come upon the historic September date, Americans everywhere are flooded with emotions when they think back to the horrific events from 2001. Most can remember where they were and what was happening around them when the planes struck the World Trade Center. And most will never forget how they felt as they watched the effects of that terror attack unfold in the days following.

So, what’s the answer? Will there ever be an appropriate way to thank 9/11 first responders? Are there any words or actions that can truly “give back” to the families who lost their loved ones as they heroically responded to the terrorist attacks? The short answer is no. As a nation, we will probably never know how to thank 9/11 first responders in a way that seems fitting for what they did for our country. But, we can try. Here are some great ideas of things you can do to show your appreciation.

First responders everywhere are some of the bravest, most selfless people you will ever meet. They go out of their way to save the lives of others without stopping for a minute to think about what could happen to them. They respond to the call for help, day after day, regardless of how dangerous that call maybe.

First responders put their lives on the line and don’t look for anything in return except the safety and good health of those they serve. But, when you think back to a severe tragedy that strikes an entire nation the way the September 11th attacks did, Americans everywhere have an overwhelming urge to show their appreciation. Here are six ways you can thank 9/11 first responders in your community and beyond.

Whether you are talking about police, firefighters, or medical personnel, all first responders are busy people. They sometimes spend hours on the scene without sleep or food. They hardly get a chance to sit down during their shift and eat a good, home-cooked meal. In fact, they are often eating on the run if they get the chance to eat at all. One way to thank 9/11 first responders on the anniversary of this tragedy is to cook a hot, healthy meal for them to have. This is a great show of appreciation and a means of supporting your first responders while they are busy responding to the call of their duty.

As you know, first responders are selfless people. They are not only the brave men and women running to help you during an emergency, they are people who are invested in the community they serve. They can often be found supporting or even hosting charitable events to impact their communities. Find out what charities your local first responders are involved in. Make a donation to that charity as a way to thank 9/11 first responders on the anniversary this year.

Sometimes a simple letter of thanks in your own words can make a huge impact on the first responders who serve your community. And, you don’t have to stick to your local first responders to say thanks. Do your research and you can thank 9/11 first responders right in the heart of the city where the tragedy struck. There are also many organizations that support first responders and their families. They accept letters of thanks from people who are willing to put their thoughts into writing. You can add a donation to your letter as well.

Homemade gift baskets are a great item for any recipient. But, they can have an even bigger impact on your first responders. Find out what items they need in their station. Fill a basket with gift cards to local restaurants. Include a nice handwritten thank you not and you have the perfect gift to say thank you for all they do.

With social media at our fingertips, it’s easy to properly recognize someone who went out of their way to save the lives of others. As more and more stories are filtered around the internet about heroes from 9/11, spreading the word is a great way to thank 9/11 first responders. The world is filled with negativity. Why not spread a positive word about the men and women who end their days with feel-good stories that should make us all proud?

When tragedy strikes, many people don’t want to talk about it. This is mostly due to the fact that they don’t know what to say. But, the best way to thank 9/11 first responders may be to simply tell them to their face. First responders, in general, truly appreciate when people come up to them and say thank you. It’s a great chance to make their day or pick them up when they’ve had some tough calls. They go out there to make a difference in the lives of others. While they don’t do it for a thank you, it’s always nice to get recognition for their hard works.

First responders everywhere serve our communities every second of every day all year long. As we celebrate 19 years since the September 11th attacks, take a few minutes to thank 9/11 first responders in your area. You never know how a small gesture can change their lives forever.